Bandanas in a hard rain 30 years ago 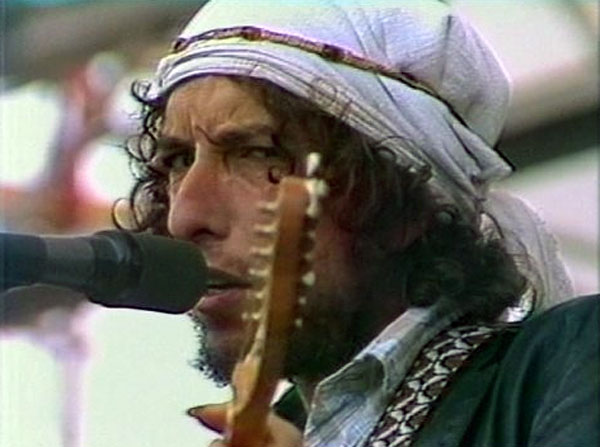 Following the release of "Desire" Dylan continued his Rolling Thunder Revue in 1976, but it was hard if not impossible to recreate the spontaneity of the 1975 tour. When the Revue finally performed in Fort Collins on May 23rd, it just seemed so symbolic that in probably one of their best shows of the tour they had to confront a hard rain. The concert had been recorded on film (for an NBC broadcast) and for an album, both entitled "Hard Rain".
The show was recorded at the Hughes Stadium of the Colorado University and broadcast on TV on September 14. Joan Baez, Roger McGuinn, T-Bone Burnett, Scarlet Rivera, Rob Stoner, Bob Neuwirth, Mick Ronson and Howie Wyeth joined Dylan among others from the 1975 leg of the tour.
A month after the "Hard Rain" concert and 30 years ago on April 22, 1976 (by the way – Mike Hobo's 4th birthday), they performed at the Belleview Biltmore Hotel in Clearwater, Florida. This indoor show had also been recorded for TV, but has never been officially released.
Fanmade DVDs of both TV recordings are circulating among traders. Now on the 30th anniversary of "Hard Rain" one can only wonder why there still is no official product available.