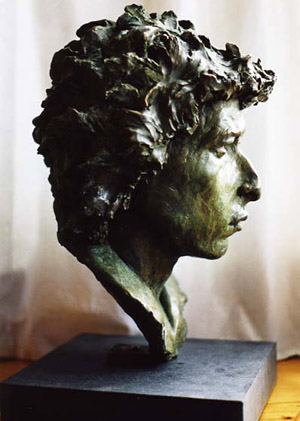 Bob Dylan has been inspiring generations of artists both by his art and his personality. Transcending genres and styles, countless artworks have been created during the past four decades showing Bob Dylan or motives based on his music and biography.
British sculptor Lesley Pover, who has exhibited widely in London and abroad, and whose work includes a larger-than-life size bronze statue of Lord Nelson in Greenwich, and a portrait in bronze of Diana, Princess of Wales, has now added a remarkable piece of work to the catalogue of Dylan-related artworks: "I was thrilled to be given such a charismatic man to portray but, as always happens, the richer and deeper the character, the more elusive and subtle the qualities", Pover comments on her new bronze life-size head of Bob Dylan. "The humour, pathos, passion and wisdom touched me profoundly and I realised that no-one sings the heart and soul of a Dylan song like Dylan."
Bob Dylan's pictures and music accompanied Pover during the process of creation: "Waking or sleeping, dreaming or meditating, his face was in front of me. Photos were blown up and pinned all over my studio, depicting him from 16 years to the present day. The face that finally evolved shows him in his early thirties."

The artist is also offering for sale an edition in gilded herculite at a price around £500. If you are interested, please contact Mrs. Laura Crocken Stevens, at laura.stevens@yahoo.co.uk.