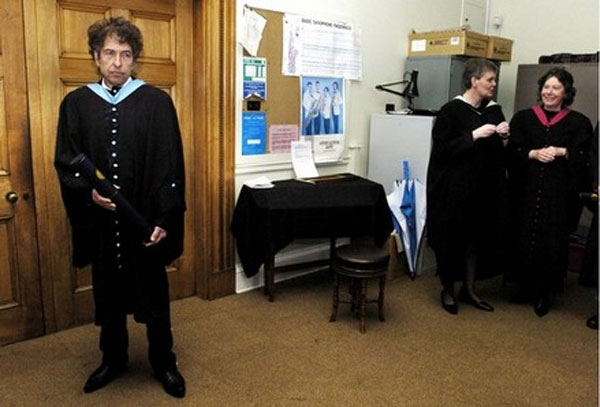 Bob Dylan has received an honorary degree by the University of St Andrews in Scotland. He was made a Doctor of Music at this year's summer graduations. According to St Andrews principal, Dylan's "most popular work from the 1960s and 70s still are relevant today and in particular his lyrics are still part of our consciousness".

Dylan has only ever accepted one honorary degree before, from Princeton University in 1970. St Andrews is Scotland's first university and the third oldest in the English-speaking world, founded in 1413.

"It seems appropriate that his second such degree should come from Scotland's oldest university, since Scottish border ballads and folksongs have been the inspiration for some of his melodies, and his great song 'Highlands' is an elaborate riff, or descant, on Robert Burns."

(Professor Neil Corcoran of the School of English in his laureation)