Interview with friends of the Pre-wheelin' Bob Dylan 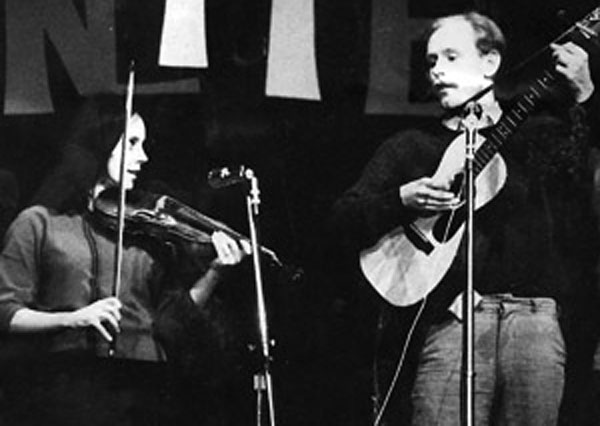 I got an e-mail from singer/songwriter Roger Salloom. He asked me if I could get a message to Bob Dylan. It was about a musician friend, David Satterfield, who passed away a few years ago. Roger told me that David and his former wife Bernella had been friends of Bob in NYC before he became famous. He also wrote that their daughter, Cordelia, wanted to let Bob know about it. The story made me curious and I started to do a little research on the Internet, where I found Cordelia’s website and contacted her to verify the information. It turned out to become a very nice e-mail correspondence, both with Cordelia and her mother Nell.

MIKE HOBO: Cordelia, you were born in 1961 and your parents were hanging out with Bob Dylan at that time?

CORDELIA SATTERFIELD HANNA: Yes, my parents, David and Bernella (Nell Levin) Satterfield were very close friends of his in Greenwich Village in 1960-61, where I was conceived. I was born in December 1961, so I don’t remember him, but my parents knew him while my mom was pregnant with me and when I was a baby, and I grew up hearing stories about him.

Is there a particular story you’re thinking of?

The story I always grew up with was that when I was born, Bob held me and said to my dad, "What’s his name, Dave?" to which my dad replied "It’s a girl, Bob, and her name is Cordelia", to which Bob responded "Well, when I have a kid, it’s gonna be a boy and I’m going to name him Jessie", which of course he did. I ended up naming my son Dylan in his honor.

What was the connection between your parents and Dylan?

My parents knew Dylan before he was famous. They are folk/old timey musicians, and they spent a lot of time with Dylan playing music, hanging out. My dad and Dylan had a great intellectual connection, were both interested in folklore and ethnomusicology, and liked the same music: folk, blues, and music from the British Isles. Also my parents were to become radical political activists, working on the anti-war movement and civil rights, so they were of the same political persuasion.

Nell, as your daughter already pointed out, Dylan wasn’t famous yet. How did you get to know him?

NELL LEVIN: When Cordelia was three months old, we made a trip back to NYC from Hanover, NH where we were living while David finished college. We went right to the Village and stayed with friends who lived a block away from "Positively 4th Street" where Dylan was living at the time. We quickly found Dylan at the Folklore Center on Macdougal, his usual hangout (besides the Kettle of Fish). We invited him back to the apartment with us. In the early period when we were hanging out, we were just a bunch of young kids making the scene, staying up all night to pick music, share songs, hang out and talk, go club hopping, the usual stuff kids do.

Did Dylan ever reveal his real name or mention why he changed it?

He never mentioned his real name. He was busy creating his identity at this time and a large part of that was telling everyone he was an orphan from New Mexico. We didn’t hear his real name until several years later and of course were surprised that he was a middle-class Jewish boy.

Has he then already played any of his own songs to you?

He sat there in our friends’ living room and played for us most of the songs off Freewheelin’ including "Don’t Think Twice", "Blowin’ in the Wind", etc. This was before the album was released. We were blown away. Little Cordelia heard all these songs when she was three months old which would have been March 1962.

Cordelia: Kinda cool to know that I heard Bob Dylan's music as an infant before the rest of the world did!

Dylan also learned to play various kinds of traditionals, folk and blues then.

Nell: He was such a good student of all styles of music from Hank Williams to British and Celtic folk, to blues greats, and he knew all these styles, and studied them and learned them all, and this was how he was able to fuse it all together into his unique style. One night we went over where Dylan was crashing and he played us a recording of Hank Williams’ bluesy tunes. This was the first time I had heard Hank Williams and it changed my life. I have Bob to thank for turning me on to Hank. When I read Dylan’s book, I was impressed, once again, with his deep knowledge, understanding and respect for traditional American music. This was the music that we young folks were really into during that early period. And it is the music that some of us are still into today.

What else were you listening to at the time?

At the time we knew Dylan we were listening to the "Harry Smith Anthology of Folk Music" and the Smithsonian field recordings of the "real people", mainly in the South. We played old time string band music à la the "New Lost City Ramblers", a group that Dylan praises in "Biograph".

Cordelia, your father David Satterfield was a singer as well, what was Dylan thinking about him?

My father was a really great natural talented singer, a great interpreter of Ballads from the British Isles, as well as having a real feel for the Blues and Bluegrass. Dad was a poor boy from Indiana, so he grew up among black folks, and his ancestors hailed from Scotland and Ireland, like Bill Monroe, father of Bluegrass and many Appalachian folk musicians. I think Dylan knew he was the real thing. That was why he sang so good. My mom tells me that Bob loved my father's singing, and thought he was a stellar talent. I don’t have any archives of my folks playing with Dylan, unfortunately, only a couple of recordings of my dad survived, but if you listen to them, it is clear why Dylan thought he was one of the best singers he had heard at the time.

Nell: David Satterfield and I did the soundtrack for "Guns of the Trees", an early underground black and white film in the mode of John Cassavetes, directed by Village Voice film critic Jonas Mekas. Allen Ginsberg is also on the soundtrack. We performed under the names "Sara and Gaither Wiley". Dylan does NOT appear on the soundtrack. We suggested to Mekas that he should use Dylan but he chose to use us instead. So goes history.

When was the last time you met Dylan?

Our last face to face encounter with Dylan was in 1963 when he came over to the apartment where we were staying in NYC to visit. By this time he had an entourage and it was apparent that everyone wanted a piece of him.

Do you still listen to his music? Any favorite albums? What do you think of this newer stuff?

If I listen to him, it is usually the earlier stuff. I have not been listening to his newer stuff. I recently played fiddle on a demo where the producer wanted me to sound like Scarlet Rivera on Desire, so I listened to that album several times in the last month. I can’t say I have a favorite album but I do know when I was younger that each Dylan release was a cultural event. His lyrics were dissected for arcane meanings, we listened to each album over and over, etc. This was during the sixties when I was living collectively with a group of political activists connected with Students for a Democratic Society. When "Like a Rolling Stone" hit the mainstream airwaves, we knew that this was going to revolutionize American culture. Unfortunately, this prophecy has turned out to be only partially true.

Bob Dylan and his songs are still an important part of your life?

Cordelia: Dylan has always been part of my life - the background music to the film of my life...as I said, my son was even named after him, and I can't really think about my dad without also thinking about Bob Dylan. We listened to Dylan all the time growing up, certain albums remind me of my dad so much, who died in 2000.

Nell: Cordelia’s father, a brilliant man and a gifted singer whom Dylan admired, died at age 59 after many years as a practicing alcoholic.

Have you ever discovered anything in Dylan’s lyrics that could be a reference to your story?

Cordelia: I think that in "Bob Dylan’s Dream" from 1963 he wrote about those early years in Greenwich Village, when he sings: "While riding on a train going West, I fell to sleep for to take my rest, I dreamed a dream that made me sad, concerning myself and the first few friends I had."

Have you ever contacted Dylan after 1963?

Cordelia: When my dad died in November 2000, Roger Salloom, a singer/songwriter and friend of my parents, tried to get to Dylan to let him know the news. He was never able to reach him, and I am not sure if Dylan would remember my parents from 45 years earlier anyway, although as my mom says, they were very close friends at one time, and my dad’s singing and knowledge of folk and blues made a big impression on Dylan apparently, so perhaps he would remember him. Maybe your website will help him remember.

Your father and Dylan were about the same age, right?

Their birthdays are exactly a month apart. Also Bob and my dad had their motorcycle accidents within a few days of each other. My dad was in the hospital with a concussion. My mom broke her shoulder.

A simple twist of fate?

Dad always felt it was syncronicity...